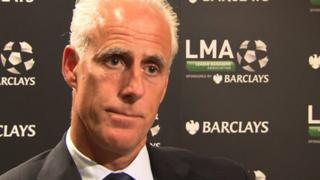 Former Wolves manager Mick McCarthy tells BBC Sport's Jacqui Oatley that Jez Moxey, one of the men behind his dismissal, was always supportive of him and compliments his skills as an administrator.

In the first interview since he was sacked the former Sunderland boss reveals nothing but admiration for his former club and their fans.

McCarthy also has high praise for his erstwhile assistant Terry Connor, who has taken over from him at Molineux and says they are still great friends.