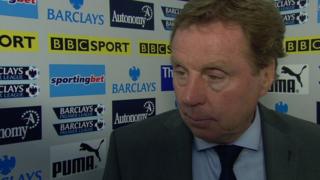 Tottenham manager Harry Redknapp is frustrated following Spurs' 1-1 draw with Stoke and says his players should believe in their passing game and not panic.

Spurs have now fallen behind their North London rivals Arsenal in the Premier League and Redknapp believes his team need to get on a winning run.