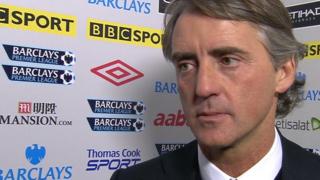 Manchester City manager Roberto Mancini says their "deserved" 2-1 win over Chelsea is worth "more than three points" in their pursuit of a first Premier League title.

Samir Nasri scored his side's winner from a pass from Carlos Tevez, who returned to action for the first time in six months after refusing to come on as a substitute against Bayern Munich in October.

Mancini says although Tevez is not "100%" his football knowledge allowed him to come off the bench and perform.