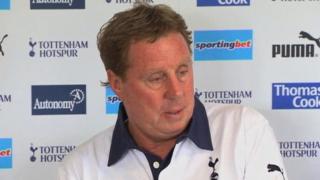 Tottenham manager Harry Redknapp says it is "absolute rubbish" that his link to the England job has contributed to his side's recent downturn in form.

Since Fabio Capello resigned as England boss on 8 February, Spurs have won just one of their five Premier League games.

Redknapp believes his players "don't worry if i'm going to England", and with nine games to go there will be "a lot of twists and turns" in Tottenham's bid to finish in the top four.