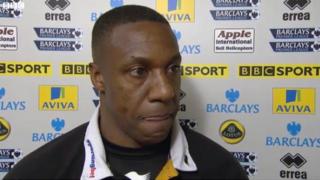 Wolves manager Terry Connor says the award of a penalty against Eggert Jonsson in his side's 2-1 defeat at Norwich was harsh and he believes they deserved a point from the game at Carrow Road.

Connor says Jonsson's handball was not deliberate, but admits the key to the match was his team's failure to hold on to a hard-fought lead for more than a minute, as Grant Holt's goal cancelled out Matt Jarvis's opener.