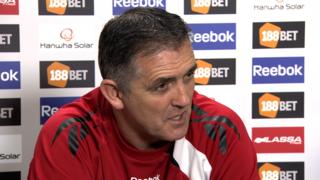 Bolton boss Owen Coyle says Fabrice Muamba continues to show signs of "improvement" following the cardiac arrest he suffered during last week's FA Cup quarter-final against Tottenham, and the 23-year-old was even able to watch highlights of Saturday's 2-1 win over Blackburn.

Coyle jokes that he thinks the midfielder fell asleep during the programme with the scoreline at 2-0, but adds Muamba is thankful for the support fans have shown him.

Bolton will replay the quarter-final against Tottenham on Tuesday and Coyle admits it will be an "emotional night" but his players have been "boosted" by Muamba's recovery.

Muamba remains in intensive care at The London Chest Hospital where his condition is serious but stable.

Who next for Celtic? - reaction as Lennon quits as manager