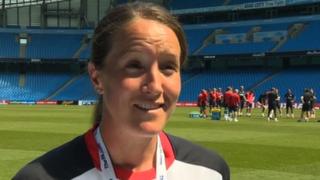 Newly appointed England women's captain Casey Stoney says it is a honour to take over from Faye White as the Great Britain team prepare for the Olympic games.

Stoney will captain England against the Netherlands in a crucial Euro 2013 qualifier on 17 June and hopes to lead the team as they open the Olympic games this summer against New Zealand at Millennium Stadium.

She also believes this summer is a ''huge'' and can be a ''springboard for women's football''.