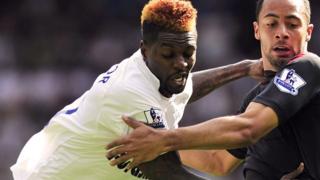 Watch Emmanuel Adebayor open the scoring for Tottenham in a 2-0 win at home to Fulham on the final day of the 2011-2012 Premier League season.

Former Arsenal striker Adebayor, who scored 18 goals in 37 appearances while on loan at White Hart Lane last season from Manchester City, has completed a £5m move to Spurs.

Pictures courtesy of the Premier League. Available to UK users only.