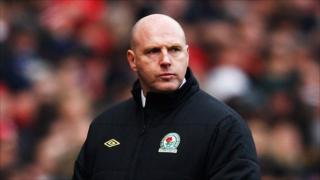 Blackburn manager Steve Kean tells BBC Radio Lancashire that he will be in a confident mood ahead of Rovers' first home game of the Championship season against Hull City on Wednesday.

Blackburn have not played a competitive match at home since the defeat to Wigan Athletic in May, which confirmed their relegation from the Premier League.