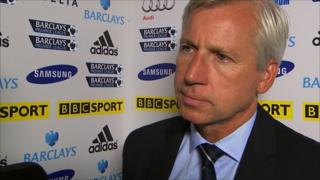 Magpies boss Alan Pardew says fans would have seen a very different Newcastle side if they had had a full week to prepare for their match with Chelsea.

On Thursday night Newcastle drew 1-1 with Atromitos in their Europa League play-off round tie, but they suffered a 2-0 defeat at Stamford Bridge on Saturday.

Chelsea's win, courtesy of goals from £32m signing Eden Hazard and striker Fernando Torres, sent the Blues to the top of the Premier League table.