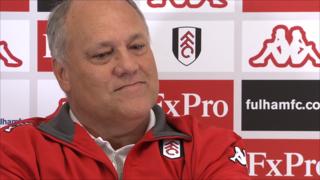 Berbatov long been a target - Jol

Fulham boss Martin Jol says he has tried to sign Dimitar Berbatov before but believes he can now secure the Manchester United striker who is having a medical at the London club.

Berbatov was close to joining Fiorentina but the deal fell through, with the Bulgarian now set to join his former manager at Craven Cottage.

Jol adds that Fulham forward Clint Dempsey is being targeted by several clubs but he wants to play in the Champions League.