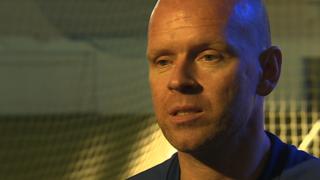 Blackburn boss Henning Berg says no other game he played in matched the "intensity" of the East Lancashire derby against Burnley.

Berg, who won the Premier League title as a player at Rovers in 1995, leads his side into Sunday's encounter at Turf Moor after taking the helm at Ewood Park following the departure of Steve Kean.

Watch Football Focus, Saturday 1 December, 12:15 GMT on BBC ONE, BBC ONE HD and this website.