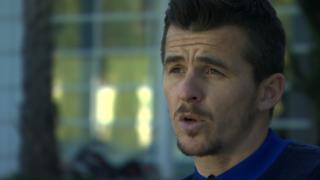 Barton fears QPR will be relegated

Joey Barton believes his parent club QPR will be relegated from the Premier League barring "a massive turnaround in fortunes".

Speaking to Football Focus presenter Dan Walker, the 30-year-old said new Rangers boss Harry Redknapp has as good a chance as anyone of keeping the Loftus Road club in the English top flight.

Barton is on loan at French side Marseille until the end of the season and says he hopes to remain there, rather than return to London.

Watch Football Focus, Saturday 1 December, 12:15 GMT on BBC ONE, BBC ONE HD and this website.