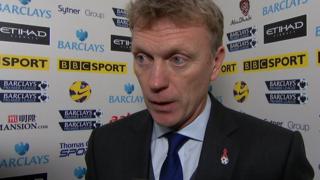 Everton manager David Moyes is disappointed with the decision that led to the penalty from which Man City equalised in their 1-1 draw at Eastlands.

The Toffees took the lead through Marouane Fellaini before Carlos Tevez scored from the spot to salvage a point.

Moyes says he thinks the referee did not actually see the incident that led to the penalty and believes it was not a foul.