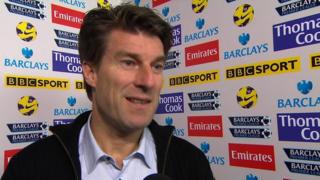 Swansea boss Michael Laudrup is thrilled after his Swansea side score late to defeat Arsenal 2-0, with two goals for leading scorer Michu.

The Spanish striker Michu curled home after a neat one-two with Luke Moore before another composed finish gave Wojciech Szczesny no hope.

The win sees the Swans up to seventh in the Premier League.