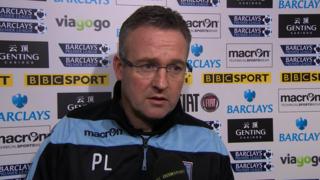 Aston Villa manager Paul Lambert says Southampton's first-half penalty that led to their 1-0 win at Villa Park should "never" have been awarded.

Saints top scorer Rickie Lambert scored from the spot after Jay Rodriguez appeared to go down without contact from Enda Stevens in the area, and Lambert says the referee's decision was "hurtful".

The defeat means Villa drop into the Premier League relegation zone with 19 points from 22 games.