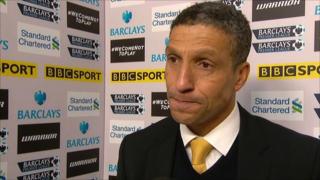 Norwich manager Chris Hughton admits his side were "well-beaten" by a "quality" Liverpool side, after they suffered a 5-0 thrashing at Anfield.

Luis Suarez and Daniel Sturridge started together for the first time and both scored, with Jordan Henderson, Steven Gerrard and an own-goal from Ryan Bennett adding to the Reds' impressive goal tally.

The win was Liverpool's biggest of the season so far, and Sturridge's goal means he becomes the first player since Ray Kennedy in 1974 to score in each of his first three games for the club.