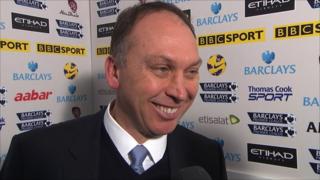 David Platt is pleased with Manchester City's 2-0 win over Fulham despite his side not really "taking advantage" after taking the lead inside two minutes.

David Silva's goal after just 95 seconds gave City an early advantage, and the City first team coach believes the Spanish midfielder "could have had three" as the home side struggled to make the most of their superiority in front of goal.