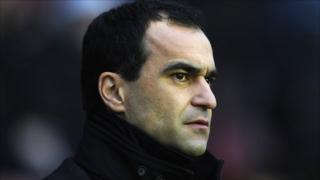 No-one else to blame - Martinez

Roberto Martinez says Wigan have "no-one to blame apart from ourselves" after letting slip an early lead to lose 3-2 at home to Sunderland.

The Wigan manager says the Latics must "correct their mistakes quickly" if they are to retain their Premier League status, despite praising the "character and responsibility" of his team's second half performance.

The loss is Wigan's fifth straight top-flight game they have failed to win at the DW Stadium. In addition, Wigan are the only Premier League club yet to keep a clean sheet at home this season.