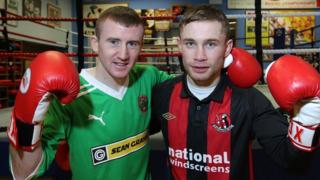 Olympic bronze medallist Barnes said he was confident Premiership leaders Cliftonville, with star turn Liam Boyce, would beat the Crues for the third time this season.

Frampton believed the Crues would retain the trophy, having beaten Coleraine in the 2012 final.