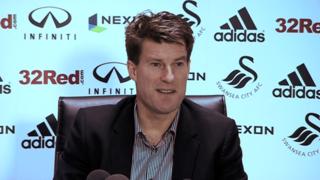 Swansea manager Michael Laudrup believes Chelsea "need" to win the League Cup more than his side do.

Speaking ahead of Wednesday's semi-final second leg, Laudrup says the Blues were under more pressure to win silverware because of the amount of money they have spent spend on their squad.

Swansea lead the tie 2-0, but Laudrup insists that Rafa Benitez's Chelsea side are favourites, while Benitez says his team have the "confidence" to overturn the deficit.