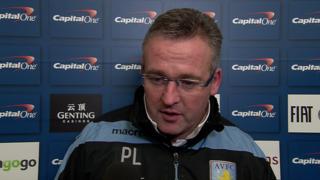 Aston Villa boss Paul Lambert says his side will "never have a better chance" to reach a cup final after losing to Bradford in the Capital One Cup semi-final.

Villa lost 4-3 on aggregate despite winning the second leg 2-1, and Lambert says the goals his side conceded over the two legs were "unacceptable".

The Villa boss urges his players to "come out fighting" as they look to climb the Premier League table and avoid relegation.