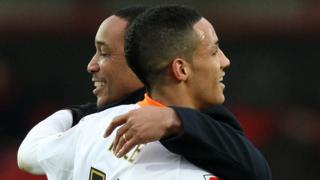 Ince's son will only move for right club

Blackpool manager Paul Ince tells BBC Late Kick Off North West he will not let his highly-rated son Tom leave Bloomfield Road for the Premier League unless he joins a club where he is guaranteed to play.

The 21-year-old is on the radar of several clubs and was heavily linked with a move to Liverpool in January, but the former Blackburn and MK Dons boss says if Tom does leave it must be in the best interests of both his son and Blackpool.

More from Paul Ince on managing his son, changing the culture at the club and his experiences in football on Sunday 17 March on BBC1 North West.

Ronaldo marks landmark with another goal