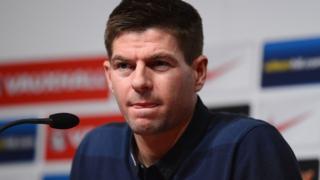 England skipper Steven Gerrard says he expects opponents San Marino to slow the game down and commit fouls when they meet in their World Cup qualifier.

The Liverpool captain is set to win his 102nd cap on Friday, but defender Rio Ferdinand has withdrawn from the squad for the games against San Marino and Montenegro.

Gerrard says Ferdinand's absence is "unfortunate" but he has turned his focus to the four other centre-halves in the squad.