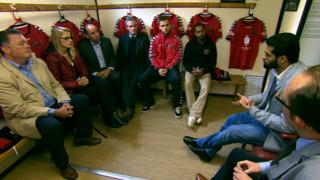 The head of the Qatar 2022 World Cup bid team, Hassan al-Thawadi defends his country's gay laws to a supporters forum.

When questioned by a gay man if homosexuals were welcome at the tournament, he says that as long as visitors respect the countries views on public displays of affection then there would be no problem.

It is a different tone to the one Sepp Blatter used when asked the same question saying that same sex couples should "refrain from sexual activity".