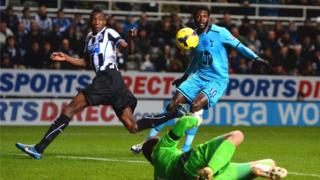 Paulinho and Nacer Chadli added to Adebayor's brace to move Spurs to within seven points of leaders Chelsea.

Since Tim Sherwood took charge in late December, Tottenham have taken 23 points from a possible 30 in the Premier League.