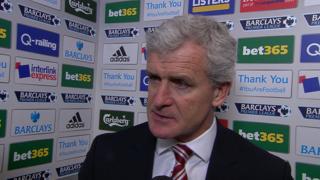 Stoke boss Mark Hughes says he is "disappointed" his side were not awarded a "clear-cut" penalty in their 1-1 draw with Swansea.

Hughes believes Peter Crouch, who gave Stoke the lead, was fouled in the penalty area by Swansea goalscorer Chico Flores.

The result extended Stoke's unbeaten run to three Premier League games and moves them up to 14th place, just three points above the relegation zone.