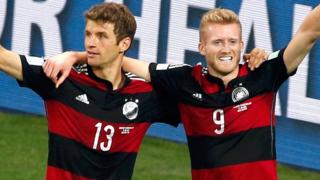 Thomas Muller gave Germany the lead, before Miroslav Klose added a second to break the World Cup scoring record. Two goals from Toni Kroos and a Sami Khedira strike made it 5-0 inside the first 30 minutes.