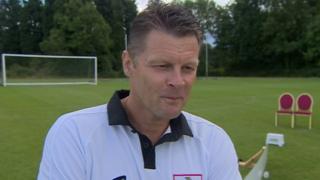 Bristol City manager Steve Cotterill tells BBC Points West it is time for the club to "start smiling" again, as they embark on the 2014-15 League One season.

The Robins were 23rd in the table when Cotterill took charge in December but he led them to a 12th-place finish and they are now among the favourites for promotion this term.

Fulham's McDonald to have kidney transplant