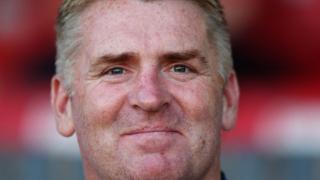 Walsall manager Dean Smith is pleased at getting through to the Johnstone's Paint Trophy regional quarter-finals for the first time since he took charge.

Summer signing Mathieu Manset's 23rd-minute winner - his first goal for the club - saw the Saddlers safely into the hat for Saturday's draw, just three weeks after losing 4-0 at Spotland in League One.

And Smith was thrilled with his players: "It was nice to see Mathieu Manset get off the mark," he told BBC WM 95.6.

"That was a really good result for us.

"We knew they were a good team. We found that out a few weeks ago when they beat us 4-0 here. But we came with a different plan and tactically we got it right.

"They put a lot of good balls into the box but we restricted them, got some good blocks in and frustrated them. We kept them at bay and protected the goalkeeper."

Liverpool 'cannot rely on the past'

'The handball rule is crazy' - Parker