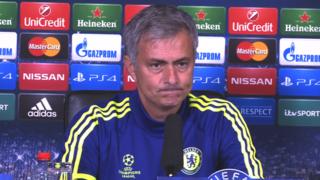 Hodgson only boss to call - Mourinho

Chelsea manager Jose Mourinho says that England coach Roy Hodgson is the only international coach that phoned him to talk about the fitness of players, despite several Chelsea players returning from international duty injured.

Diego Costa, Ramires and Andre Schurrle are all unavailable for Chelsea's Champions League clash with Maribor on Tuesday and Mourinho is disappointed that no other national team managers have been in touch.