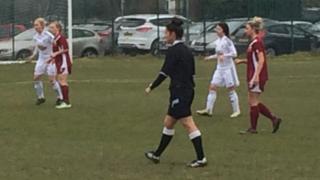 Charlotte Carpenter is set to join an elite band of officials after becoming the first Fifa-accredited female football referee from Wales,.

The 26-year-old from Abercynon is usually seen in the Welsh League, but she is now on the list of international referees and is working her way up the officiating ladder. She could eventually referee at the Women's World Cup and Women's Champions League.