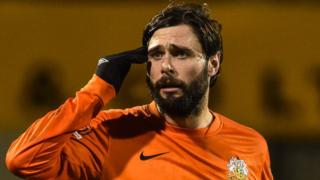 Gary Hamilton scores Glenavon's winner in their Irish Premiership match away to Glentoran on 14 February.

Player-manager Hamilton, a former Glentoran striker, was a substitute at the Oval despite having not been able to train because of injuries.

He later said it could prove to be his last goal as a medical specialist had advised him not to end his playing career.