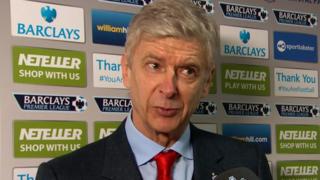 Arsenal had to dig for win - Wenger

Arsenal Manager Arsene Wenger admits his side had to weather a late storm in order to secure their 2-1 win over Crystal Palace.

Santi Cazorla and Olivier Giroud gave the Gunners a 2-0 lead, before Palace's Glenn Murray scored after a goalmouth scramble in injury time.

But Wenger's men hung on to claim victory and move up to third place in the Premier League table.