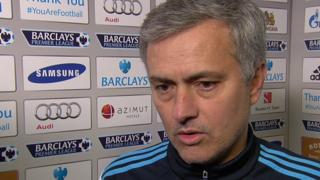 Chelsea boss Jose Mourinho identifies minutes "30, 33, 43 and 69" as "crucial" in his side's 1-1 draw at home to Burnley, but refuses to discuss the incidents concerned.

Branislav Ivanovic put the Blues ahead when he slotted in Eden Hazard's cross in the first half, but after Nemanja Matic had been sent off for his reaction to a challenge from Ashley Barnes, Ben Mee headed in a late corner to claim a draw for the visitors.

Ivanovic has scored four goals in his last six games in all competitions.