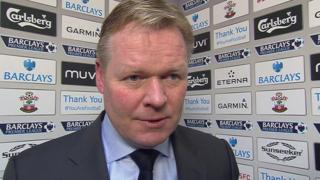 Southampton manager Ronald Koeman says they were denied at least one "clear" penalty during their 2-0 Premier League defeat to Liverpool at St Mary's.

Raheem Sterling added a second after the break to condemn fifth-placed Southampton to their eighth Premier League defeat of the season.