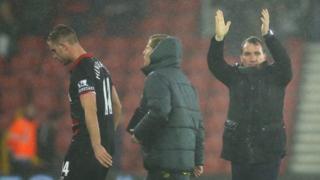 Philippe Coutinho's 25-yard curler in the third minute helped Liverpool take the lead before Raheem Sterling made it 2-0 when Matt Targett failed to clear a cross.

After the Boxing Day fixtures Liverpool were 10 points behind Man Utd - they have now cut the gap to two points.