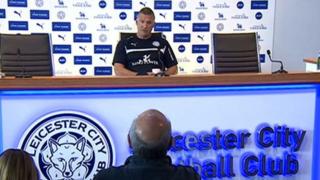 Murphy grills Pearson throughout and suggests the Foxes boss could appear to be a "bully" and "paranoid".

Pearson remains calm despite the BBC reporter's questions, which also includes asking if he has ever thought of taking anger management classes.

The exchange comes after Pearson apologised to a journalist for calling him an "ostrich" and "stupid" following Leicester's 3-1 Premier League defeat by Chelsea.

Their conversation lasted for seven minutes, including the following exchange:

Murphy: You are in danger of appearing a bully.

Pearson: Paranoid. OK. Anything else?

Murphy: Someone's got to tell you.

Pearson: OK. You're telling me.

Murphy: Has no-one ever told you that before? Has nobody ever taken you to one side and said: 'Nigel, I think you're out of order here'.

Pearson: If they have then that's my business.