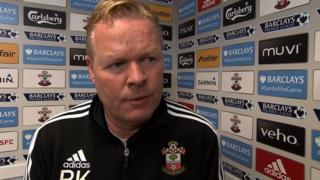 Southampton manager Ronald Koeman says his side "need to improve" after they were beaten 3-0 by Everton at St Mary's.

The Toffees secured their first victory at St Mary's in more than a decade against a lacklustre Southampton as two goals from Romelu Lukaku and a Ross Barkley strike caused the damage.

The Saints have now gone eight Premier League matches without a clean sheet, conceding more than once in seven of them.