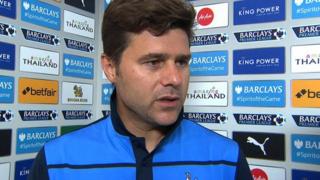 Tottenham manager Mauricio Pochettino says his side need to be more "focused and aggressive" after scoring following their 1-1 draw at Leicester.

Tottenham have won 11 points from a possible 15 in their last four Premier League games against the Foxes.