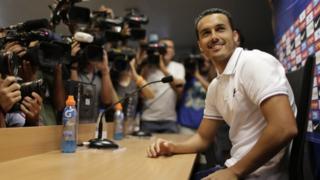 Watch Lionel Messi, Neymar and a host of other Barcelona stars come out in force as Chelsea new-boy Pedro returns to Spain for an official farewell press conference.

The 28-year-old Spanish forward, who scored on his Blues debut against West Bromwich Albion, admits that he never thought he would leave Barcelona but says he has been given "the best welcome ever" by his Blues team-mates following his £21 million move.

Pedro calls John Terry a "spectacular team captain" and reveals he must now think of a song to sing in front of his new colleagues as part of his Chelsea initiation.