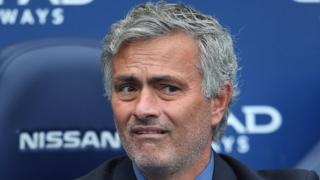 We didn't deserve to lose - Mourinho

Chelsea boss Jose Mourinho congratulates Crystal Palace on their 2-1 win at Stamford Bridge but says his side did not deserve to lose.

After a goalless first half, Palace took the lead through Bakary Sako and Chelsea responded when substitute Radamel Falcao headed in his first goal for the club. Palace regained the lead immediately as Joel Ward stabbed in a late winner.