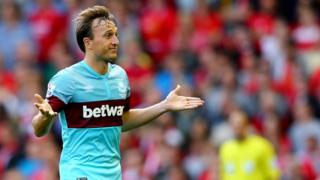 It wasn't even a yellow card - Noble

West Ham midfielder Mark Noble disagrees with the decision to send him off in his side's 3-0 victory over Liverpool at Anfield.

Noble was shown a straight red card for his challenge on Danny Ings, although the whistle had already been blown for a foul on the West Ham captain.

Both sides finished the game with 10 men as the hosts also had Philippe Coutinho sent off.