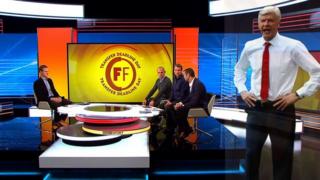 Former Gunners defender Keown says it was clear Arsenal "needed to sign a striker", but believes Arsene Wenger "steps away from the utter madness" of the transfer window.

Football writer Henry Winter say the signing of goalkeeper Petr Cech from Chelsea should have been the start of a summer of recruitment in a number of positions, not the club's only window purchase.