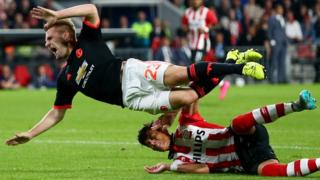 Shaw, 20, was treated on the pitch for 10 minutes after Hector Moreno's tackle during the first half of United's 2-1 defeat by PSV Eindhoven.

Moreno later said he felt "really bad" and "really sorry" that he was "involved in the accident".