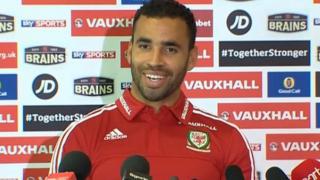 Robson-Kanu hopes to be on song

Welsh fans have sung the 26-year-old's name to the tune of Salt-N-Pepa's 1980s hit Push It during the Euro 2016 qualifying campaign.

Chris Coleman's side need one point from their final two games against Bosnia-Herzegovina on Saturday and Andorra three days later to reach next summer's European Championship finals in France.