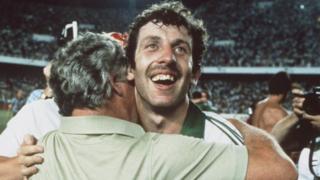 Northern Ireland's 1982 World Cup hero Gerry Armstrong believes the class of 2016 can cause similar surprises at the European Championship, which starts next week.

"Poland are one of the favourites in the group to qualify along with Germany but I can see us, as underdogs, causing an upset in that game," Armstrong said.

"With our free-kicks and set-pieces, we can cause anybody a problem. That's why we've gone 11 games unbeaten."