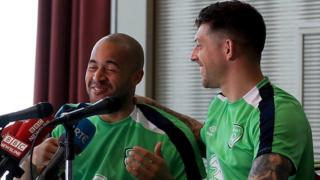 Republic keepers battle with hero Given

Darren Randolph and Keiren Westwood both hope to edge out one of their childhood heroes Shay Given for the Republic of Ireland keeper's jersey at Euro 2016.

Randolph and Westwood have been Republic room-mates for a number of years and insist there is no animosity between them despite their desire to earn the shirt for the tournament in France.

West Ham keeper Randolph has been the man in possession in recent matches but Westwood had a very impressive season with Championship club Sheffield Wednesday.