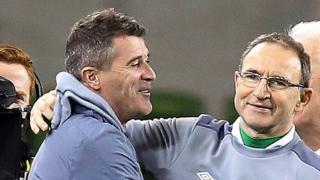 Republic of Ireland manager Martin O'Neill says he and assistant Roy Keane don't socialise together but that the country's qualification for Euro 2016 demonstrates their excellent and effective working relationship.

"It works out pretty well. We meet each other occasionally outside but we don't socialise together," said O'Neill.

"When we go into camp, we're there to work really. We enjoy it, don't get me wrong.

"He's a motivational character himself. He's been splendid for the group of players here because they have a lot of respect for what he achieved as a player."

However, O'Neill added that if the Republic had not qualified, that his decision to work with Keane could have been viewed as "a disaster".

Video is UK only