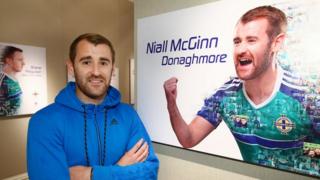 Northern Ireland winger Niall McGinn says it is hard to believe the team has reached a major tournament after a 30-year absence.

The Aberdeen player is expected to be used an impact substitute after Michael O'Neill switched to using wing-backs in his starting line-up.

Northern Ireland open their Group C campaign against Poland in Nice on Sunday.